The transition to a low-carbon future based on renewable energy sources is leading to a new role for citizens, from passive energy consumers to active energy citizens - the so-called renewable energy (RE) prosumers. Recent EU energy policy seeks to mainstream RE prosumers in each Member State. This study carries out a cross-country comparison between the regulatory frameworks of nine countries and regions - Belgium (Flanders region only), Croatia, France, Germany, Italy, Portugal, Spain, Netherlands and the United Kingdom - to reveal the main challenges and opportunities that these have posed to collective RE prosumers (i.e. renewable energy communities, citizen energy communities and jointly-acting renewable self-consumers). Four countries have had more favourable frameworks for collective prosumers: France, Germany, Netherlands and United Kingdom. The results indicate that the current legal framework at the EU level represents a clear opportunity for collective prosumers. Spain and Portugal have both already shifted from a restrictive regulation to implementing in 2019 a legal framework for collectives. The study provides a starting point to distil policy implications for improving legal frameworks relevant for collective RES prosumers across Europe. 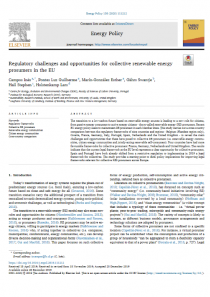 Read the article on ScienceDirect