District heating systems are proven to be an effective way of increasing energy efficiency, reducing the environmental impact and achieving higher exergy efficiency than individual heating solutions. The leaders in district heating integration are Scandinavian countries with more than 50% of the covered total heating demand. Nevertheless, these systems haven’t reached their full potential in most European countries. The reason for this could be that energy planners often study only the economic feasibility of the system, thus neglecting other crucial aspects of the previously mentioned district heating. In research papers, district heating multi-objective optimization usually takes into account the minimization of the total discounted cost and the environmental impact. Most times, these two objectives are studied as a single objective optimization problem through the internalization of the cost related to carbon dioxide emissions. This paper presents the multi-objective optimization method which is capable of optimizing district heating technology supply capacities and their operation, including thermal storage, for a one-year time horizon in order to satisfy the optimization goals. The model was written in the open-source and free programming language called Julia, while linear programming solver named Clp was used to obtain the solution. The solver is part of Julia’s optimization package called JuMP. Three separate objective functions are included in the model: the minimization of the total discounted cost, the minimization of carbon dioxide emissions and the minimization of exergy destruction. Since these three goals are often in conflict, the final result of multi-objective optimization is the so-called Pareto surface which presents the compromise between all possible results. To deal with the multi-objective optimization problem, the weighted sum method in combination with the epsilon-constraint method was used. The most suitable result has been chosen using the knee point method which is a solution the closest to the Utopia solution where all three goals reach their optimal value. 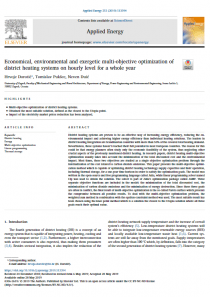 Find the article on Science Direct